She has published on the music of Ligeti, Messiaen, Carlos Chávez, David Lang, contemporary opera, the television musical, and on issues in the reception and theory of modernist music. In addition she has given papers at national and international conferences on the music of Miles Davis, Mary Lou Williams, and cross-cultural issues in twentieth century music. Her monograph Ligeti's Laments: Nostalgia, Exoticism and the Absolute (Ashgate, Nov. 2011) provides a critical analysis of the composer's works, considering both the compositions themselves and the larger cultural implications of their reception. György Ligeti's Cultural Identities, ed. with Márton Kerékfy (Routledge, 2017), is the first book devoted to exploring the composer’s life and music within the context of his East European roots, revealing his dual identities as both Hungarian national and cosmopolitan modernist. She is currently co-editor (along with Liam Cagney and Will Mason) and contributor to the Oxford Handbook of Spectral Music (forthcoming).

“Utopias and their Discontents: Ligeti’s reception history as modernist meta-narrative,” Kylwiria and Other Explorations: An international musicological conference,  Vienna and Budapest, 10–13, May, 2023.

The Oxford Handbook of Spectral and Post-Spectral Music, edited by Amy Bauer, Liam Cagney and WIll Mason (Oxford, forthcoming)

Ligeti's Laments: Nostalgia, Exoticism and the Absolute (Ashgate, 2011). Available in paperback and ebook.

“‘Are you dead, like us?’ The Liminal Status of the Undead in the Music of Ligeti,” Thanatos in Contemporary Music: From the Tragic to the Grotesque, edited by Bianca Tiplea Temes (Cluj Music Academy, 2022)

“‘Did Someone Say Post-Spectral?’ The Orchestral Imaginary in Millenial Works by Tulve, Dalbavie, and Haas," in Musical Waves: West Coast Perspectives on Pitch, Narrative, and Form, ed. Andrew Asiz and Jack Boss (Cambridge Scholars, in press)

"Codes, constraints, and the loss of control in Ligeti’s keyboard works," in A Tribute to György Ligeti in his Native Transylvania, nos. 1–2, edited by Bianca Tiplea Temes and Kofi Agawu (Cluj Music Academy, 2020)

"Spectral Aesthetics and Ecological Listening in the Music of Helena Tulve," in The Oxford Handbook of Spectral and Post-Spectral Music (Oxford, 2021)

"Electroacoustics, optics, and microtonal aesthetics in the music of Georg Friedrich Haas," with Landon Morrison, in The Oxford Handbook of Spectral and Post-Spectral Music (Oxford, 2021)

“Contemporary Opera and the Failure of Language” in The Routledge Research Companion to Modernism in Music, Björn Heile and Charles Wilson, eds. (Farnham, UK: Ashgate/Routledge, 2019), 427–53.

The Music of Helena Tulve, in Musicology Now, the American Musicological Society, March 29, 2018.

“The mysteries of Selma, Alabama”: re-telling and revelation in David Lang’s The Difficulty of Crossing a Field,” In Search of the ‘Great American Opera’: tendenzen der americanischen Musicheaters, Gregory Herzfeld and Frédéric Döhl (Münster and New York: Waxman-Verlag, 2016)

“Canon as agent of revelation in the music of Ligeti,” in Contemporary Music and Spirituality, Sander van Maas and Robert Sholl, eds. (Aldershot, UK: Ashgate, 2016)

“Nonrepetition and Personal Style in the Solis and Inventions,” Carlos Chávez and His World, Leonora Saavedra, ed. (Princeton University Press, 2015),

“Philosophy Recomposed: Stanley Cavell and the Critique of New Music,”Journal of Music Theory, 54.1 (2010): 77–92.
“The ‘Other’ of the Exotic:  Balinese Music as ‘Grammatical Paradigm’ in the Music of Ligeti,” Music Analysis 27/ii-iii (2009), 1-36.
“’Give Me Something to Sing About’: intertexuality in Once More With Feeling," Sounds of the Slayer: Music and Silence in Buffy and Angel, edit by Paul Attinello and Vanessa Knights (Aldershot, UK: Ashgate, 2009), 209-34.
“The Impossible Charm of Messiaen’s Chronochromie” Messiaen Studies,Robert Sholl, editor (Cambridge: Cambridge University Press, 2007), 154-67.

Response to "Global Notation as a Tool for Cross-Cultural and Comparative Music Analysis" by Andrew Killick, Anaytical Approaches to World Music Journal (aawmjournal.com), 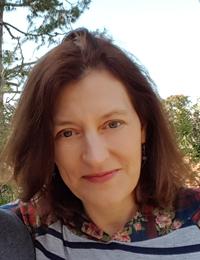