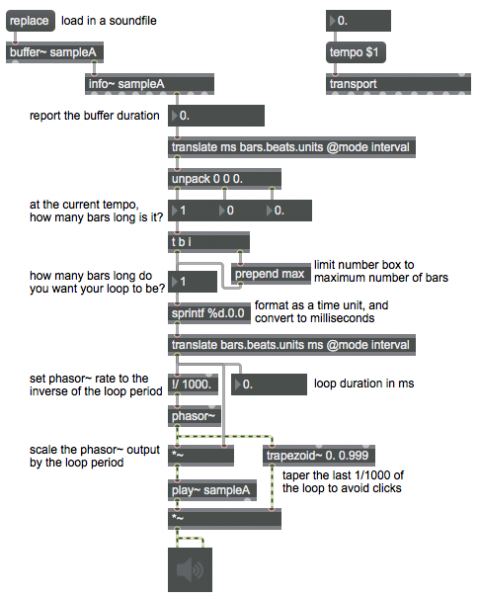 This example shows one way you might use phasor~ to make the length of an audio sample loop stay precisely synchronized with the beat of the transport.

Upon loading a sound file into a buffer~, you can use info~ to learn the duration of that buffer~ (which will be the same as the duration of the sound file if you used the replace message to load it in), and then translate that duration into bars.beats.units to find out how many measures long it is at the current transport tempo. In this example, the number of bars is used to set the maximum limit of a number box. You can use that number box to specify how many bars of the sound file you'd like to play in a loop. That number of bars is translated back into milliseconds to determine the rate and range of a phasor~. The phasor~ drives a play~ object to read from the buffer~, and it also drives a trapezoid~ object which is used as an amplitude envelope to taper the last 1/1000th of the loop in order to avoid clicks.

As you change the tempo of the transport, translate will update its output, and the phasor~ will therefore continue to read the correct number of bars' worth of sound from the buffer~.