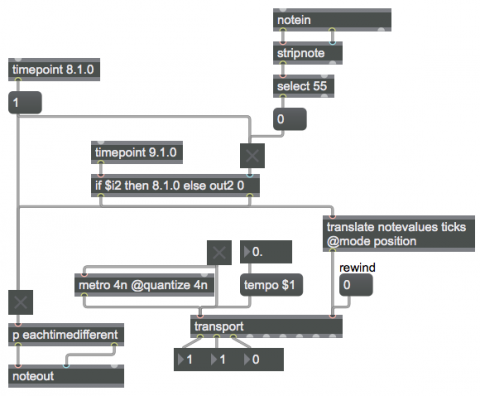 The 0 in the right inlet of if is triggered when the MIDI note 55 (G below middle C) is received (or, of course, by clicking on the message box or the toggle). This shows how the transport can actually be controlled interactively by a performer. You could think of this patch as telling the transport to repeat a 1-measure "vamp" in measure 8 until a G below middle C is played, at which point it can continue forward. And since the downbeat of measure 8 re-triggers the note-playing algorithm to choose a whole new set of random numbers—specifying rhythmic value, velocity, base pitch, and pitch range—each time, each pass through measure 8 sounds different.