Using the preset capabilities of pattrstorage 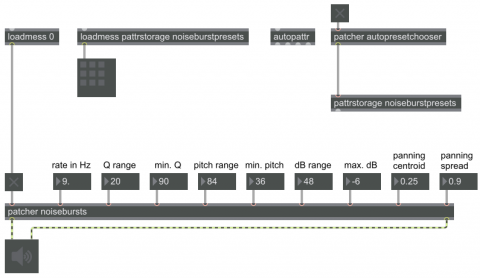 [In order for this example to work properly, you should first download the file called noiseburstpresets.json and save it with that name somewhere in the Max file search path.]

This patch shows some features of pattrstorage, and demonstrates how it might be used to structure a series of different settings to shape the formal structure of a longer period of time. For another example of how pattrstorage can store states that create a formal structure for a composition, see "Saving and recalling presets in pattrstorage".

The first thing to notice is that there is not a single pattr object anywhere in this patch. However, each of the nine labeled number boxes that provides parameter data to the patcher noisebursts subpatch has been given a scripting name in its object Inspector. The autopattr object, as soon as it is created, finds not only all the pattr objects anywhere in the patch but also all the UI objects that have scripting names, and it makes available all of those names—pattr object names and UI scripting names—to any pattrhub, pattrforward, and pattrstorage objects in the patch. So, without needing any pattr objects or explicit bindings, all we need to do is include an autopattr at the top level of our patch, and automatically all the UI objects that have scripting names will be storable and recallable by pattrstorage.

The sonic/musical function of this patch is to generate different randomized patterns of short bursts of filtered noise. The patterns are generated inside the patcher noisebursts subpatch—and all the MSP objects that create the actual bursts of filtered noise are isolated in another subpatch within that so that they can be easily enabled and disabled to turn the sound on and off—but the UI objects that provide the parameters that shape the noiseburst patterns are all in the main patch. Those UI objects all have scripting names, so they can be controlled by the pattrstorage object, and the pattrstorage can in turn be controlled by the preset object.

Before the whole system of pattr-related objects existed, a standard way to store the settings of all UI objects was with a preset object. (You can see the standard usage of the preset object in action in "Repeated notes at 6 related tempi, with different probabilities" (an example from one of the original Max tutorials), and another good example can be found in the tutorial patch for MSP Synthesis Tutorial 1: Additive Synthesis.) The preset object was notoriously a bit buggy and problematic, so the pattrstorage system is ultimately superior. Nevertheless, the straightforward graphic interface of the preset object is very effective, so a feature was added to it that would allow it to be used with pattrstorage. All you need to do is create a preset object, then send it a pattrstorage message indicating the name of the pattrstorage object you'd like it to control. From then on, you can use that preset object to store and recall presets in the named pattrstorage.

Click on the ezdac~ to turn MSP on, use the toggle to turn the noisebursts on, then try choosing one of the 16 saved presets to change the sound.

There is also a subpatch called patcher autopresetchooser that's intended to demonstrate one possible approach to automating preset changes and preset interpolations. Double-click on it to see its contents. The subpatch is designed to choose a new preset number every 15 seconds, form a recall message that will enable interpolation from the previous preset to the newly chosen present, and then trigger a 5-second interpolation from the old preset to the new preset. The resulting messages will thus say recall <previouspreset> <nextpreset> <interpolationvalue>, with each message having a different interpolation value progressing from 0 to 1 over five seconds. Try turning on the autopresetchooser subpatch to cycle randomly through all the different presets. This demonstrates how one might automate changes over a long period of time to create a certain formal structure, one that is either determinate or, as in this case, indeterminate because of randomized decisions.

The composition of known states of a patch, governing its behavior, can be composed in non-real time and stored in a whole collection of presets within pattrstorage, and those presets can then be recalled interactively or automatically in a performance to recreate known behaviors at the desired time.