Saving and recalling presets in pattrstorage 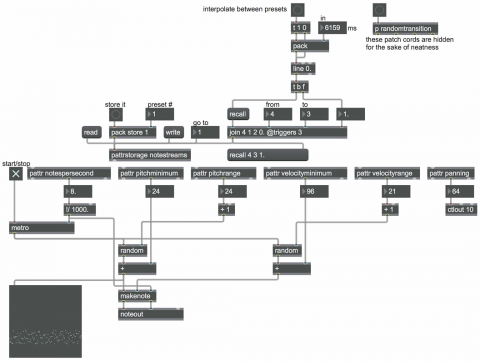 This patch demonstrates the use of pattr objects to store several attributes of a note-generating algorithm, and pattrstorage to store and recall preset values for all of those pattrs. In order to use the presets already designed for this patch, you will first need to download the file called notestreams.json and place it somewhere in the Max file search path.

(For examples demonstrating the entire family of pattr-related objects in more detail, see "Introduction to the pattr object", "Binding objects to each other, and to a pattr", "Communicate with many pattr objects from a central hub", "Storing and recalling multiple pattr values", and "Using the preset capabilities of pattrstorage".)

Significantly, pattrstorage can also interpolate between presets, doing all of the necessary calculations for you, to obtain intermediate states between any two presets of pattrvalues. To get that interpolation effect, send pattrstorage a message that starts with the word 'recall', followed by one preset number (think of it as preset A) and then another preset number (think of that as preset B) and then a value from 0. to 1. specifying the desired location between preset A and preset B. So, if you wanted to get a smooth interpolation from one preset to another, you would send a series of messages that say recall [previouspreset] [nextpreset] [interpolationvalue], with each message having a different interpolation value progressing from 0 to 1.

The note-generating algorithm shown here produces MIDI notes at a specified rate (notes per second), with each note's pitch and velocity chosen randomly from within a constrained range of possibilities. Those ranges are specified by a minimum value (the lowest allowable random choice) and a range size (from minimum to maximum). For good measure, this patch also specifies a MIDI panning value to place the notes in the stereo field. Each of those paramenters is stored in a pattr: notespersecond, pitchminimum, pitchrange, velocityminimum, velocityrange, and panning. For this example, six presets of pattr values have been stored in the notestreams.json file, so you can recall any of those presets by specifying a number 1 to 6 in the number box labeled "go to".

To interpolate gradually from one preset to another, a portion of the patch allows you to choose a starting preset, an ending preset, and an interpolation time, and then when you click on the button labeled "interpolate between presets", it will construct a series of 'recall' messages to cause the desired transition from one preset to another. To spare you the tedium of doing that by hand, there's also a subpatch called randomtransition that will randomly choose a new preset to which to transition, and will choose a random amount of time from 1 to 10 seconds to get there. Try clicking on the button in the top right corner of the patch to hear some interpolations from one preset to another. The pitches are played by the noteout object, and are displayed by the multislider (set in "Reverse Point Scroll" slider style with a single slider).