Communicate with many pattr objects from a central hub 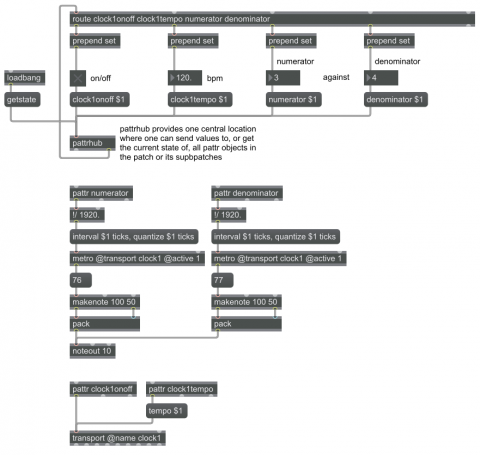 In large and complex patches that have many pattr objects, it might be useful to be able to communicate with all of them at one central location. That is the purpose of the pattrhub object. With pattrhub you can alter the contents of any pattr just by using the name of the pattr followed by the data you want to put in it. You can also query the current contents of any pattr by preceding its name with the word "get" (as in gettempo if there is a pattr tempo object somewhere in the patch). You can query the contents of all the pattr objects in the patch with the message getstate. Whenever you query the values of pattr objects, the information comes out the right outlet of pattrhub, preceded by the name of the pattr(s) in question. Thus, you can use a route object to look for and parse the values of the various pattrs coming out of pattrhub.

In this example, we have made a program that performs simple rational polyrhythms. We specify a numerator and denominator for the ratio of one rhythm to another, and we divide those values into 1920 (the number of ticks in a whole note) to determine the correct number of ticks to use as the time intervals for the two metros. We're using a named transport object, with the name "clock1", to keep it distinct from the global transport. The numerator, denominator, and beat tempo are all stored in pattrs so that we can set them in one part of the patch and use them in another part.

Whatever the values of the pattrs are when the patch is saved, those values will be saved with the patch and will be sent out when the patch is loaded. Using the getstate message to pattrhub, we can query the saved contents of each pattr, and can use that information to set the initial values of the UI objects. Notice that in this case, the pattrs are not explicitly bound to any UI objects, and the UI objects don't have any scripting names. We're just using the getting and setting capabilities of pattrhub to make the communication between the UI objects and the pattrs.