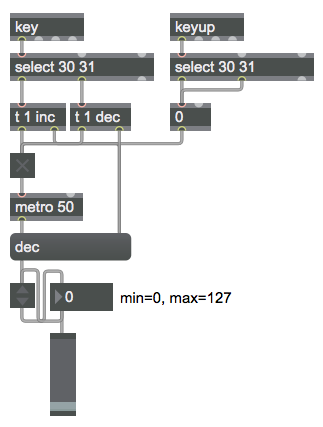 The up-down arrow keys seem like reasonable keys to use for incrementing or decrementing a number box or a slider. But rather than require a new key press for each step up or down, you can use a fast metro to trigger messages continuously as long as the key is pressed. There are several ways one could implement this in Max; here's one example.

There's an object called incdec that is designed to be interconnected with a number box in the way that's shown here. It keeps track of the value in the number box and takes inc and dec messages to increment or decrement the number box. The key object first triggers the correct message—inc or dec—to set the contents of the message box, and then it turns on a metro to repeatedly send that message. When the key is released, it triggers a 0 to stop the metro. The number box has been set in the Inspector to have a minimum value of 0 and a maximum value of 127, so attempts to decrement it or increment it beyond those bounds will be limited (clipped) to those values.