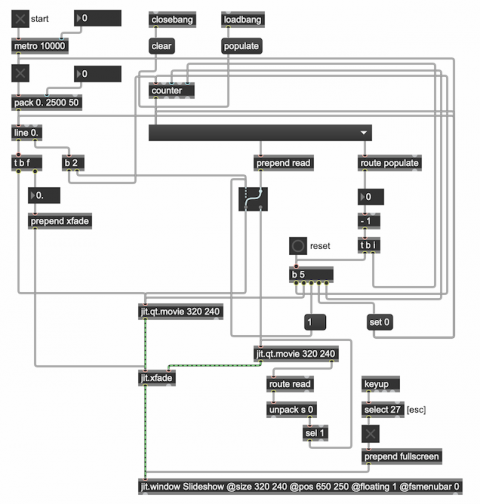 The program assumes images that are 320x240 pixels. If you want to use another size, you should change the dimensions of the jit.qt.movie objects and the size of the jit.window. Images that do not have a 4:3 aspect ratio will get distorted when shown fullscreen, unless some adjustments are made.

In order to let the program know what folder to look in for the images, you have to edit the ubumenu object. Unlock the patcher, click once on the ubumenu object, and choose "Get Info..." from the Object menu to open the ubumenu inspector. Where it says "Prefix" in the inspector, click on the "Folder..." button, and then Choose from the dialog box the folder you want to use. Close the inspector, lock the patcher, and Save it. From now on the ubumenu will store the pathname of that folder, and will use that folder to look for filenames.

The names of the files get loaded into the ubumenu when it receives the populate message, which is triggered when the patch is first opened. When the ubumenu has populated itself with filenames from the specified folder, it sends out the message populate N, where “N” is the number of items in the ubumenu. Using the route object, one can capture that message and use the number of items in the menu to set the maximum count of the counter object. (Note that the ubumenu items are numbered starting from 0, so the counter is set to generate numbers from 0 to one less than the number of items in the ubumenu.) After setting the maximum of the counter, the program performs a number of reset actions (i.e., initializes settings). It first resets the counter to its minimum value (0); then it sets the toggle, line, and ubumenu objects to 0 (without causing any output); it then sets the gGate to 1 (so that the first file will get loaded into the right jit.qt.movie object (in a moment); it then bangs the left jit.qt.movie object just so that the jit.xfade object will have the right dimensions; and then it bangs the counter, which sends out a 0, which selects the top item from the ubumenu, which sends it as a read <filename> message to gGate, which routes it to the right jit.qt.movie object, thus loading that image.

If the image is successfully loaded, the jit.qt.movie object will send the message read <filename> 1. out its right outlet. If there was an error in reading the file, the 1 will be a 0 instead. So, by looking for the number 1, we can know when the image has been loaded successfully, and can then trigger the jit.qt.movie to send its matrix to the right inlet of jit.xfade. Since we're dealing with still images, and since jit.xfade remembers the matrix name in its right inlet, we only need to send this one time, whenever the image in the right jit.qt.movie changes. If we were showing videos instead of still images, we'd need a separate metro to send bangs to both jit.qt.movie objects at the desired frame rate.

Now, when you start the metro, the first bang will flip the toggle to 1, sending the message 1. 2500 50 to line, which will begin fading toward the right matrix of jit.xfade by sending multiple xfade N messages to jit.xfade, where “N” is a value from 0. to 1. With each new xfade value, we also bang the left jit.qt.movie, to re-trigger jit.xfade and show the new blend of images.

When line reaches its destination value after 2.5 seconds, it sends a bang out its right outlet. We use this bang to flip the gGate to point to its other outlet, and to trigger the counter to send the next filename to the other jit.qt.movie object (the one we're not currently seeing, because we have faded all the way to the other image).

The next time metro sends out a bang, it flips the toggle back to 0, causing a fade back to the left matrix of jit.xfade, after which line will again send a bang out its right outlet, causing the next image to be loaded into the jit.qt.movie object that we are not currently viewing.

Thus we always see one image (the current image) in the jit.window, except during the 2.5 seconds when we fade to the next image. As soon as the fade is complete and we're seeing only the next image, the "next" image becomes the "current" image, and we load a new "next" image into the jit.qt.movie that we're not seeing. The "current" image is seen in the jit.window, and the "next" filename is seen in the ubumenu.

When the patch is closed, closebang triggers a clear message to empty the ubumenu so it will be ready to be re-populated next time it is opened.

The escape key [esc] can be used to toggle fullscreen view on and off.

If we wanted to use a similar technique to show a succession of video clips, we'd have to change some things. 1) We'd need another metro to bang both jit.qt.movie objects at the desired frame rate. 2) We might want to use the duration of each clip to decide when to fade to the next movie, instead of a fixed duration. 3) We would want to fade the audio of each movie, too, using the vol N message to each jit.qt.movie object, corresponding to the xfade value.