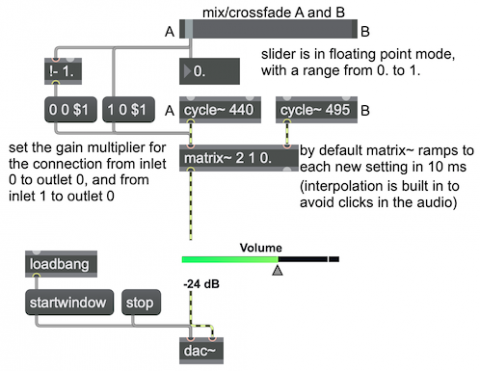 Mixing and crossfading are such common operations in audio and video that it makes sense to have an object dedicated to that purpose. In Jitter, the jit.xfade object gives easy control for mixing or crossfading two matrices (i.e., two images). In MSP, the matrix~ object is a controllable multichannel audio mixer. For simply mixing or crossfading two audio signals, you can use matrix~ 2 1 0. as a 2-in/1-out mixer, as in the example patch here. (Or you can build a mixer yourself easily enough, save it as an abstraction, and reuse it in any patch as in the examples "A useful subpatch for mixing and balancing two sounds", "Mix two signals (more efficiently)", and "Mixing and crossfading".) This example allows the mixing/crossfading to be controlled by hand via a slider.

Note that the matrix~ object demonstrated in this example implements linear mixing (a linear crossfade from one signal to another), which is very simple and direct and works for many situations, but may not always be the most desirable way to get from one sound to another in all circumstances. A straight line is one very special kind of curve—the most direct path possible between two points. One could use any curve of transition other than a straight line. The curve that’s used for mixing two signals is called the law; different laws are used for different effects. Commonly an exponential curve is used, to compensate for our tendency to perceive relative to the logarithm of the stimulus (known as Fechner’s law).

The same principle described above applies when mixing two images or two videos; one image is faded down to 0 brightness while the other is being faded up to full brightness. The jit.xfade object is the video equivalent of the audio mixing shown above. The use of the jit.xfade object to mix/crossfade Jitter matrices is demonstrated in the example titled "Video crossfade".