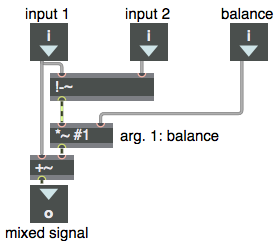 This demonstrates a linear interpolation formula for achieving a weighted balance of two signals. It has the exact same effect as A useful subpatch for mixing and balancing two sounds, but uses a more efficient formula, requiring one fewer multiplication per sample.

The way we calculate this is

where x1 and x2 are the two signal values and balance is the weighting value described above.

A linear signal from 0 to 1 or from 1 to 0 coming in the right inlet will make a smooth linear crossfade between the two audio signals.