Play a stream of random grains from a sound file 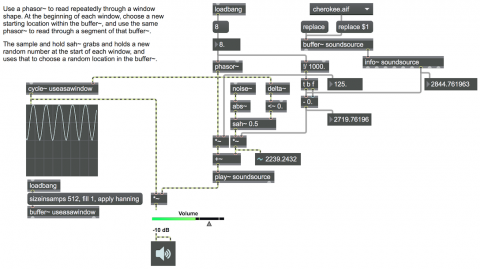 This patch demonstrates a method for playing a stream of sound grains randomly chosen from a sound file.

We first load a sound file into a buffer~. When you use the replace message to load the file, the buffer~ will be resized to the size of the sound file, and buffer~ will send a bang out of its right outlet when it has finished loading the file. The bang can be used to trigger an info~ object, which will report information about the sound file. The info we care about in this case is the file's duration; that duration, in milliseconds, will tell us the range of numbers we can use to specify a grain segment we want to play.

The phasor~ object is used here to read through a segment of the sound, and also to read through the windowing function contained in the buffer~ useasawindow, which we have filled with a Hann (a.k.a. Hanning) window function. That window shape will be used to taper the amplitude of the grain of sound at each end, thus avoiding clicks.

Since we know the frequency of the phasor~ in cycles per second, we can easily calculate its period in ms (1000/frequency), giving us the duration of each grain. At just the precise moment when each new grain starts—when the window function has tapered the sound's amplitude down to 0—we choose a new starting location in the buffer~. We can detect when the phasor~ starts a new cycle by checking its change with the delta~ object. At the moment when the phasor~ leaps from 1 back to 0, the change will suddenly be negative, causing a 1 value to come out of the <~ 0 object. That will trigger the sah~ (sample and hold) object to grab a random value from the noise~ object (the absolute value of which will be between 0 and 1). We multiply that by the duration of the buffer~, and use the result to set a new random starting point in the buffer~. From that point, we read through the next grain of sound (the duration of which we calculated using the period of the phasor~). Because we choose the new location at the very beginning of the phasor~'s cycle, the amplitude will be 0 at that moment, so there will be no discontinuty in the sound. The result is a continuous stream of randomly chosen bits of sound, at a constant rate, windowed by the Hanning function.