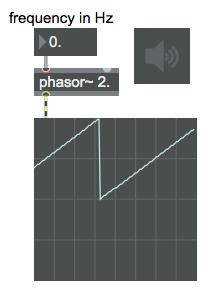 The phasor~ object is one of the most valuable MSP signals to use as a control signal. (You wouldn't generally want to listen to it directly as audio because it's an ideal sawtooth wave and has energy at so many harmonics that it can easily create aliasing. If you want a sawtooth wave sound, it's better to use the saw~ object, which limits its harmonics so as not to exceed the Nyquist frequency.) The phasor~ outputs a signal that ramps cyclically from 0 to 1. It's actually more correct to say that phasor~ ramps from 0 to almost 1, because it will never actually output the value 1; it will instead output 0 because the end of a ramp is the same moment as the beginning of the next ramp. Because phasor~ is constantly moving and interpolating between 0 and 1, it's usually best not to rely on detecting any specific value in its output signal, but just to know that it's always increasing linearly from 0 toward 1.

This patch simply allows you to see the signal produced by phasor~. The following examples show some ways it can be useful:

“Repeatedly reading a function with phasor~”

“Triggering events with each cycle of a phasor~”