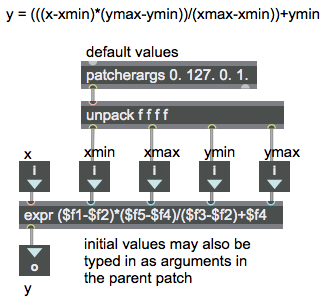 The term "mapping" refers to making a map of correspondences between a source domain and some other "target" range. (Think of the game where you are given words in one category and are challenged to try to find an appropriate correspondence in another category, as in "Kitten is to cat as puppy is to ...".) The simplest kind of numerical mapping is called "linear mapping". That's when a one-to-one correspondence is drawn from every value in a source range X to a value that holds an exactly comparable position in a target range Y. For example, in the target range 0 to 100, the value 20 holds exactly the same position as the value 2 does in the source range 0 to 10. In both cases, the value is 20% of the distance from the minimum to the maximum.

To convert one range into another linearly, there are really just two simple operations required: scaling (multiplication, to resize the range) and offsetting (addition, to push the range up or down). If you know the extent of two ranges X and Y, and a source value x, you can find the linearly corresponding target y value with this algebraic equation:

This patch has inlet objects and an outlet object so that it can be used as an object in another patch. You just save this patch with the name "lmap" somewhere in Max's file search path, and you can then use it as a lmap object in any other patch. You establish the X and Y ranges by specifying their minimum and maximum (xmin, xmax, ymin, and ymax), then you send an x value in the left inlet to get the corresponding y value out the outlet. The patcherargs object supplies default initial values for xmin, xmax, ymin, and ymax in case no arguments are typed into the object when it's created in the parent patch; however, if values are typed in for xmin, xmax, ymin, and ymax (as in lmap 0. 1. -2. 2.), the patcherargs object inside lmap will send those values out instead of its default values.

Go ahead and download that patch and save it with the name "lmap", as it will be used in the example "Linear mapping and linear interpolation". In Max, patches that are saved with a one-word filename and used as objects in another patch are called "abstractions". This lmap abstraction functions very much like the zmap object and scale object that already exist in Max, but I've provided lmap here so that you can see how one might implement the basic linear mapping function (in any language).