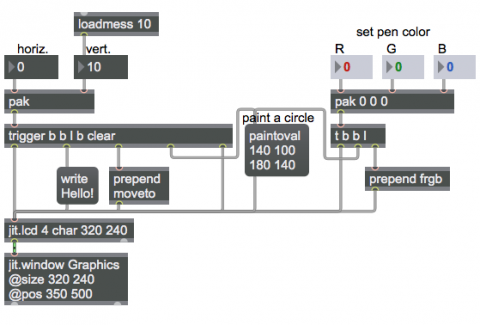 The jit.lcd object understands a variety of command messages for drawing simple things such as lines, geometric shapes, text, and pictures any place in a matrix. You can think of the matrix in jit.lcd as a canvas on which you can draw, write, or paint using messages. You choose a color “pen” you want to use, you move the cursor to the location where you want to draw something, then you draw it. This patch demonstrates a few of the many drawing messages you can send to jit.lcd.

The message frgb sets the pen color using three arguments for intensity of red, green, and blue. For example ‘frgb 255 255 0′ mixes full intensity red and green to get yellow, and ‘frgb 128 0 128′ mixes red and blue to get purple. Initially, the pen color is black (0 0 0) by default. By default the background color used for every undrawn pixel is white (255 255 255), but you can change the background color with the brgb message (not shown in this patch). For example, ‘brgb 192 192 192′ would make the background light gray.

In the example patch, we use the pak object to collect the three color arguments as a list, and then we use the prepend object to put the word ‘frgb’ before the list to construct a complete message for jit.lcd. The pak object is similar to the pack object, but a message in any of pak's inlets triggers output, whereas only a message in the left inlet of pack triggers output. Since we’re using pak, a new frgb message will be triggered whenever you change any of the three color arguments.

The paintoval message paints a filled oval using the pen color specified by the most recent frgb message. You specify the location of the oval in the four arguments of the paintoval message, which designate the left, top, right, and bottom coordinates of the rectangle that bounds the oval you want to paint. In this example the bounding rectangle’s left-top corner is at coordinate 140, 100 (140 pixels from the left edge and 100 pixels from the top edge) and its right-bottom corner is at 180 140, resulting in a circle with diameter of 40 pixels.

To draw lines or write text, you first have to move the cursor to the desired drawing location with a moveto message, then give the drawing command. The normal thing to do is to send all the drawing messages that are needed to draw whatever you want to draw, then use a bang to send out the completed matrix. The upper left portion of the patch shows how a number of messages can be triggered instantaneously (in rapid succession) to do all the different steps in making the drawing.

Whenever you change one of the number boxes marked “horiz.” or “vert.” to change the location of the written text, pak object combines both coordinates into a single two-item list, and the trigger object (which can be abbreviated as t) then causes five things to happen: it clears the matrix in jit.lcd (fills it with the background color), paints the oval, moves the cursor to the specified coordinates, writes the text “Hello!” there, then sends the matrix to .jit.window to be displayed.