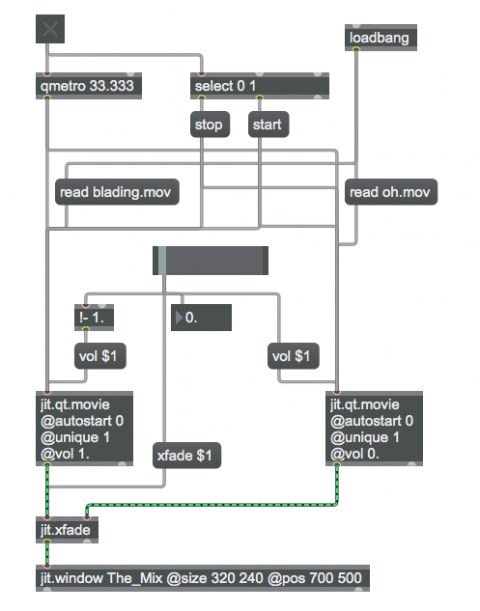 You can make a crossfade between two videos or betwen two sounds by multiplying the amplitude of one of them by values going progressively from 1 to 0 while you multiply the other by values going progressively from 0 to 1. In this example, we use a slider object that outputs values from 0 to 1 to control the volume of two movie soundtracks, using the vol attribute of jit.qt.movie (or jit.movie). Notice that initially the vol attribute for the movie on the left is set to 1 and the volume of movie on the right is set to 0. As you move the slider, for the movie on the left the value is subtracted from 1 with the !- object, so that the volume of that movie goes from 1 to 0 while the volume of the movie on the right goes from 0 to 1. When the slider is right in the middle, both volumes will be at 0.5. Thus, the slider controls the balance of the sound of the two movies, and can be used to fade from one to the other.