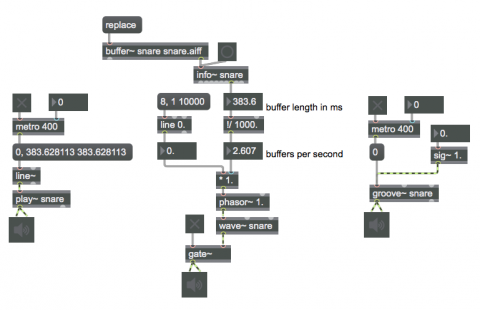 This patch demonstrates a few different ways of reading audio from buffer~.

The sound file snare.aiff, which is provided with the Max application, is loaded into buffer~ with the replace message. Whenever a new file is loaded in, buffer~ sends a bang out of its right outlet to indicate that the procedure has completed. That bang can be used to get information about the contents of the buffer~ with the info~ object, such as the duration of the buffer~.

On the left, we're using the play~ object to access the sound data in the buffer~ named snare. You can play the data simply by sending a start message to play~, or you can use a signal to indicate to play~ the current playback position, sample-by-sample. Here we're using the latter method. Once every 400 milliseconds, the metro triggers the line~ object to go from 0 to 383.628113 (the exact duration of the buffer~ contents) in 383.628113 milliseconds, causing playback at normal speed. A different duration in the message to line~ would also cause a different playback rate.

On the right, we're using a groove~ object to access the same buffer~. The constant signal value of 1 from the sig~ object indicates normal playback rate, and the metro triggers the message 0, causing groove~ to leap to time 0 and play back from there to the end of the buffer. If we were to change the value of sig~, groove~ would play back the sound at a corresponding rate.

In the middle example, we're using a continually changing playback rate to loop repeatedly through the sound. The phasor~'s output from 0 to 1 tells the wave~ object to read the from beginning to the end of the buffer. The rate at which phasor~ does that (the phasor~ frequency) is determined by the buffers-per-second value we've calculated based on the duration of the buffer~'s contents, as well as the output of the line object. When you click on the message box that says 8, 1 10000, it tells phasor~ to start at a rate of 8 times the buffer-per-second value (that is, to play through the whole buffer 8 times per second), and over the course of ten seconds slow down until it is playing at an even slower-then-normal rate. This creates an effect of a sped-up quickly-repeating version of the sound gradually slowing until it becomes recognizable as the original sound.

Through imaginative combinations of starting time, loop duration, playback rate, and triggering rate, you can achieve a wide variety of playback effects, from the normal to the bizarre.