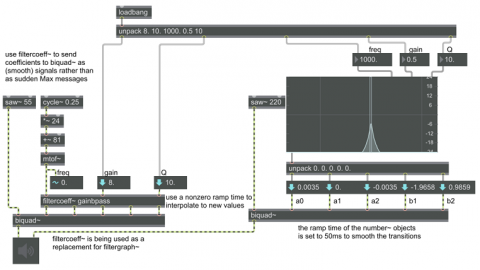 If you want to change the coefficients of biquad~ in real time while a sound is playing, it's usually better to use MSP signals rather than individual Max messages, to avoid causing clicks. In that case, you should replace filtergraph~ with filtercoeff~ and send the frequency, gain, and Q parameters into filtercoeff~ as smooth signals (as shown in the left portion of the example). Or, if you also need the graphic interface capabilities of filtergraph, use line~—or number~ with a nonzero ramp time—as an intermediary between filtergraph~ and biquad~, to smooth the transitions with interpolation (as shown in the right portion of the example).