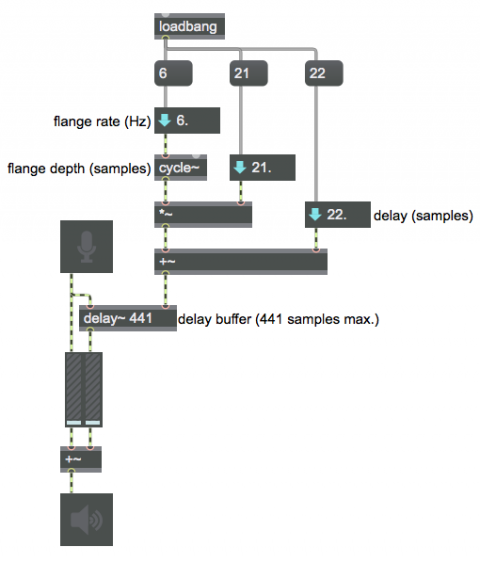 This patch demonstrates a simple implementation of "flanging"—the effect created by making a delayed copy of a sound, with the delay time periodically fluctuating, and then mixing the delayed sound with the original.

The number of samples of delay can be provided in the right inlet of a delay~ object as an MSP signal instead of as an individual Max int or float message. The main reason for doing that is to get a special effect by continuously modulating the delay time. When the delay time is modulated by a repeating signal such as a low-frequency oscillator (LFO), the resulting effect is flanging. Essentially, any time the delay is changing continuously, that's a simulation of the sound source moving toward us or away from us, which introduces a "Doppler shift" in the perceived pitch.

Notice that the signal in the right inlet of delay~ represents samples of delay, so we need to scale the output of cycle~ to the appropriate range and offset its center point. In this example we scale its range to + or - 21 samples and offset that by 22 samples, so the delay time fluctuates between 1 and 43 samples, 6 times per second. Subtle flanging of plus or minus about half a millisecond, as is shown in this example, imposes a modest vibrato on the incoming sound. You can play around with different flange rates and different depths of vibrato to get a variety of effects. When the flanged sound is mixed with the direct sound, the two sounds interfere in potentially interesting ways.

As you can read in the article "Categories of Perception for Vibrato, Flange, and Stereo Chorus: Mapping Out the Musically Useful Ranges of Modulation Rate and Depth for Delay-Based Effects", a flange depth of 1 ms is amply sufficient for subtle musical uses, and depths greater than that are more in the range of "supra-useful" values for more obvious audio effects. This flanger is made capable of accepting delays up to 10 ms (441 samples), thus flange depths up to 5 ms.