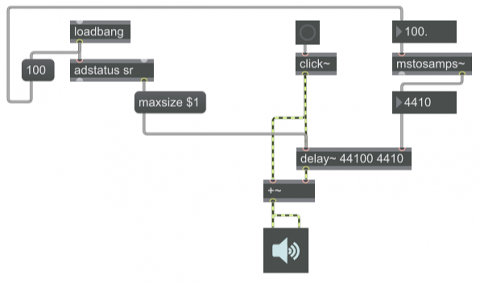 The delay~ object creates a "ring buffer" into which it constantly records the signal coming in its left inlet. The first typed-in argument specifies the size of the buffer, in samples. The second argument (or a number in the right inlet) specifies how many samples in the past delay~ should look for the signal it will send out its outlet. So, assuming a sample rate of 44100 Hz, this patch creates a one-second buffer and instructs delay~ to send out the sound it received 1/10 of a second ago.

Entering those values as typed-in arguments makes a rather unsafe assumption about the sample rate. (The sample rate could be 48000 or 96000 or whatever the user has set it to.) A better way to make sure you're allotting the correct amount of memory and specifying the correct delay time is to use an adstatus ‘sr’ object (which can be triggered by loadbang to report the sample rate) to calculate the size of the buffer in samples (in this case we know we want 1 second's worth of memory, so we can use the sample rate directly), and use the mstosamps~ object (which will make its calculation based on the current sample rate) to convert the desired delay time from milliseconds to samples.

When the click~ object receives a bang it sends out a single sample with a value of 1; it sends out all 0 values otherwise. That's a very clearly defined moment in time (known as an "impulse") that lets you confirm that delay~ is doing what it's supposed to do.