Record line~ as a series of numbers 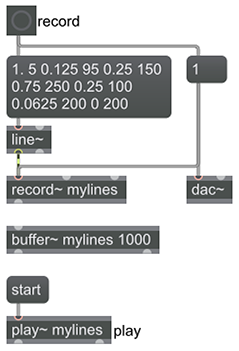 To record the output of a line~ as a series of numbers, a buffer~ can be used to capture the entirety of its output. To record the output, connect the line~ to a record~ with the same name as the buffer~. The buffer can then be played back by creating a play~ object with the same name as the buffer~ and sending it a start message.