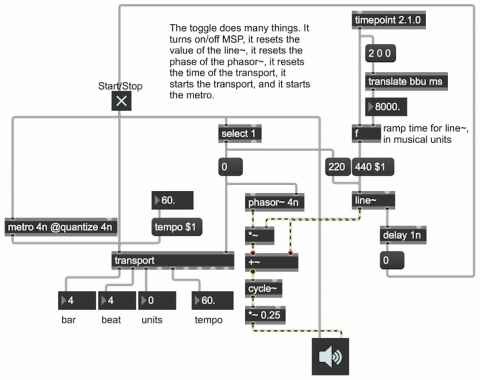 The transport object allows you to control timing in Max with a timeline-based model using musical time units such as bars and beats, a governing tempo (beat rate), and note values such as eighth notes, triplet sixteenth notes, etc.

The timing interval of the metro is set to 4n, which will be exactly one quarter note at whatever tempo is specified. It is also quantized to the nearest quarter note on the timeline, with the @quantize 4n argument, so that it only sends out its bangs right on the beat according to the transport. The only thing the metro actually does in this patch is bang the transport object, which causes it to report information about its current state (location in time, tempo, etc.).

The MSP objects phasor~ and line~ are capable of understanding tempo-relative note values. You can also use the translate object to convert between absolute time values and musical time values if you need to. In this patch, it's not strictly necessary to convert the musical time interval 2 0 0 from bbu (bars, beats, and units) into ms (milliseconds), but we do so anyway to show that, no matter what the tempo we set for the transport, the translate object will make the proper conversion for us.

When expressing time in bbu format, it's important to understand the distinction between a position in time (a specific location on the transport's timeline, in terms of bars, beats, and ticks) and an interval of time (an amount of time). In the timepoint object, we're specifying a precise moment in time, bar 2 beat 1 exactly, whereas for the line~ object we're specifying an amount of time, 2 measures exactly, for it to reach its destination. In conversation we might use similar expressions to say these two things: "bar two" or "two bars"; but it's important to keep in mind that they're different things, and are expressed differently in bbu units. Also, notice that bbu units can be expressed in either of two ways, either as a space-separated list of three integers or as a dot-separated set of three integers.