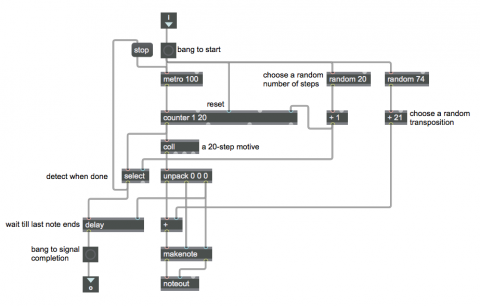 This patch enacts a particular type of improvisational behavior, playing a partial statement of a stored motivic phrase. The phrase is stored in a coll (collection) object, as an ordered array of lists, with each list containing three numbers: pitch, velocity, and duration for a MIDI note message. Each time a message comes in the inlet, the patch chooses a transposition of the motive at random, chooses a number of notes to play, and starts a metro to begin counting through the numbered items in the coll. When the patch has played the chosen number of notes (based on the numbers coming out of the counter), the select object stops the metro and, after waiting for the last note to finish, sends out a bang to indicate that its phrase is done.

From a musical standpoint, the stored motive is planned in such a way to work well with this kind of treatment. Notice that some indices in the coll are missing, which creates a distinctive and recognizable syncopated rhythm (or some part of it) each time the motive is played. The pitches are chosen to create an atonal disjunct phrase, focusing on intervals of a perfect fifth or tritone, and using 11 different pitches in the 14-note phrase. Thus, each time the improviser plays something, it has the distinctive rhythm, pitch contour, and atonality of the stored phrase, but always at a different transposition and truncated by a different amount.

This particular abstraction, a patch meant to be used inside another patch, has a straightforward communication protocol: any message in its inlet gets converted to bang and starts the process, and when the process is done, it sends a bang out its outlet to indicate completion. This abstraction is used inside another example, titled "Choose from among multiple processes".