Choose from among multiple processes 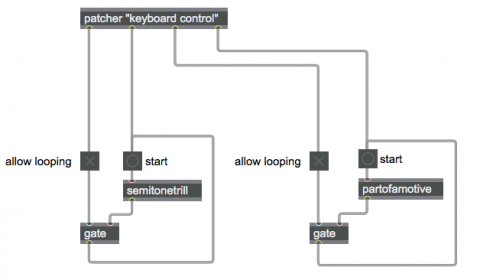 When you write a Max patch that enacts a musical behavior, it's a good idea to think about how you'll want to use that patch in a larger context that might include several behaviors. Often it's a good idea to encapsulate an algorithm so that it can be used inside another patch, either as a subpatch in a patcher object or as a separate file that can be used as an abstraction (a subpatch that you include in a main patch by making an object with that filename). In this patch, we use two saved abstractions, each of which does a particular musical task. The abstraction called semitonetrill plays a semitone trill of variable length at a randomly chosen pitch level. The abstraction called partofamotive plays a variable portion of a stored melodic phrase. Because we knew we were going to use those inside this patch, we designed them both to have the same communication protocol: a bang in the inlet of the abstraction starts the process, and when the process is done, it sends a bang out its outlet to indicate completion. That means we can trigger each one at any time, and can know when it has completed its task (possibly using that information to start something else).

In this example we use keystrokes of the letters 'a' and 'b' to trigger one process or the other (or both simultaneously). We use keystrokes of the letters 'A' and 'B' to trigger each process to play repeatedly in a loop. We use gate objects to determine whether the bang at the end of the process will be allowed to loop back and trigger the process to start again. If you double-click on the patcher "keyboard control" object to see its contents, you'll see that a key object is used to get the keystroke information, and a select object is used to detect if one of the keys we're looking for has been pressed. If it's a capital letter 'A' or 'B', we also trigger the number 1 to be sent to the toggle in the main patch to allow looping; if it's a small letter 'a' or 'b', we trigger the number 0 to turn looping off, so that the process runs only once. As you can see from this example, the gate object can be very useful in this sort of situation, to allow or disallow certain messages to pass through. In this way, you can have many possible activities at the ready, and trigger only the ones you want, and you can alter their behavior based on the state of an object such as gate.