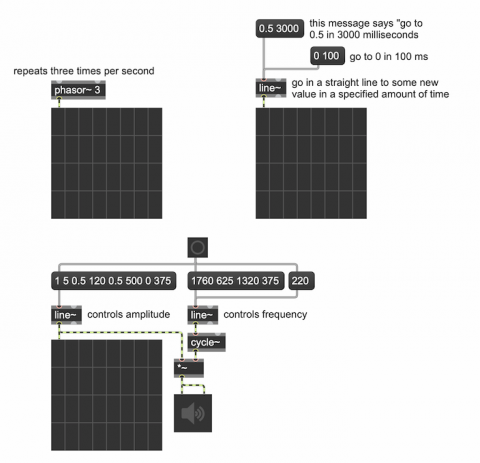 The line~ object, shown in the upper right part of this patch, produces a control signal that goes from one value to another in a specified amount of time and then stays at that new value until it gets further instructions. The message that it expects to receive is a list of two or more numbers. (A list is a specific message type in Max that starts with a number followed by additional items—usually other numbers—separated by spaces.) The first number in the list specifies a destination signal value, and the second number in the list specifies the amount of time, in milliseconds, that line~ should take to get there.

The button triggers three messages. Because of the right-to-left ordering rule of Max messages, the message 220 is triggered first, telling line~ to go immediately to a value of 220. The other two messages then tell one line~ object to play a specific two-segment shape of frequency glissando in a cycle~ object, while another line~ object makes a four-segment shape to control the amplitude of that tone.