Expanding vibrato on an ascending glissando 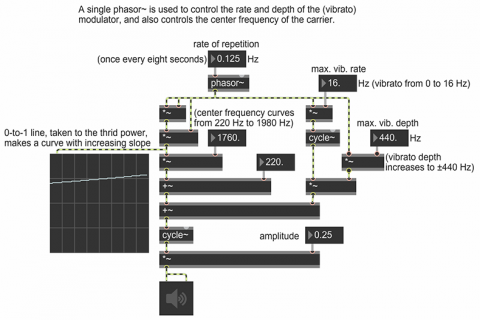 A single phasor~ object can serve to synchronize several different modulations. In this example, the phasor~ is scaled and applied in three different ways. On the left side of the patch, the output of the phasor~ is cubed (multiplied by itself, then multiplied by itself again) so that it's a gentle curve instead of a straight line; that curve is then scaled by a factor of 1760, offset by 220, and used as the central frequency of the cycle~ object. On the right side of the patch, the phasor~ is used to control both vibrato rate and vibrato depth of a modulating cycle~ object; so, in that case, the phasor~ has an indirect effect on the sound, modulating the rate and depth of another modulator. Because all of the modulations are synched to the same phasor~, they all recur with the same periodicity, but the accumulated effect of them makes the sound evolve within each period, creating a tone that rises in frequency while its vibrato increases in rate and depth.