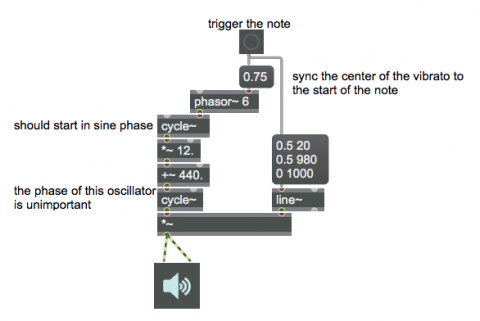 Here are a few behaviors of the cycle~ object worth knowing.

1) When an inlet is capable of accepting either a signal or a float, as in the case of the right inlet of a cycle~ object, and a signal patch cord is connected to that inlet (say, for example, coming from a phasor~), float messages are ignored. The signal and the float are not combined in any way. You can use one or the other but not both.

2) It is more correct to think of the value supplied in the right inlet of cycle~ not as the instantaneous phase, but rather as the phase offset that is applied to the otherwise independent operation of the cycle~.

Some examples might help to make that last sentence clear.

c) Each time MSP audio is turned on, cycle~ starts at 0 phase plus whatever phase offset is supplied in its right inlet. If a cycle~ is running at some nonzero frequency and you later send it a float phase offset of 0 hoping to set it back to its initial default phase, you will be disappointed because all you have done is change its phase offset (or not changed it at all if its phase offset was already 0) relative to where it was in its cycle at that instant; it will continue to run from wherever it was (offset by whatever phase offset has been specified for it).

d) A float message in the right inlet of a phasor~ object is different. It does reset the phasor~ to whatever phase you specify, at the moment that it receives a float in its right inlet. So let’s say you want to apply a sinusoidal vibrato to a note, and you want it always to begin on the center frequency of the vibrato. You would therefore want to ensure that your LFO is in sine phase at the moment the note is played. You could control your LFO with a phasor~, and set the phase of the phasor to 0.75 (specifying sine phase for the cosinusoidal cycle~ object) at the moment each note is played.

e) Starting with Max version 8, the cycle~ object understands a reset message with an argument between 0 and 1 to reset its phase position at that moment in time. So, a message reset 0.75 will cause cycle~ to go immediately to the point 3/4 of the way through its waveform (equivalent to the sine phase) and proceed from there. In both cases, either with a float in the right inlet of the phasor~ object or with a reset message to cycle~, any float value that exceeds the range 0 to 1 will be wrapped around to be kept within the range from 0 to 1.