Crossfade to new location in a video 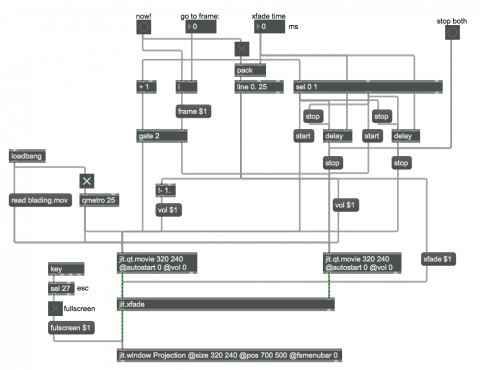 To try it out, choose a crossfade time—say, 2000 milliseconds (two seconds)—then choose a frame to go to. (The example video blading.mov, which comes with Max, is exactly twelve seconds long with a frame rate of 15 fps; so, frame numbers up to 180 will work.) When you click on the button to trigger the crossfade, it flips the state of the toggle from 0 to 1. That, in turn, causes the select object to send a bang to start the video that's not currently showing (the jit.qt.movie object on the right), sends a message from pack to the line object to make the crossfade to that video with progressive xfade messages to jit.xfade, and opens the correct outlet of the gate object to direct the frame message to the video were crossfading to. When the crossfade is completed, the bang from the select object, which has been delayed that amount of time in the delay object, is used to stop the video that we no longer see (the jit.qt.movie object on the left). The next time we click the button, the toggle flips its state to 0, and the process is reversed.

You can probably imagine a situtation using a longer video, where you might want to do several such crossfades to new locations interactively at specific moments. The frame destinations and fade times could be stored in a coll object, and you could step through those stored fades with a counter.