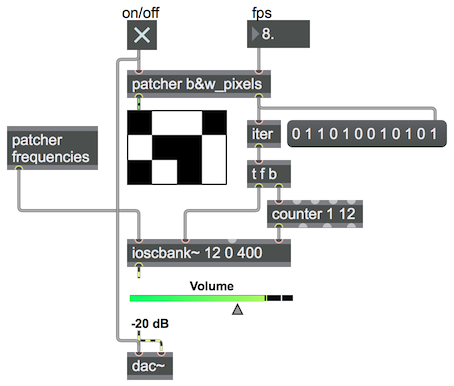 This patch uses a random number generator to choose a mix of 12 sine tones, play them, and display them as white pixels in a black and white matrix. The 12 sine tones are played with a single object called ioscbank~, which is a bank of interpolating sinusoidal oscillators.

The on/off choices for each of the 12 oscillators are generated in a jit.noise object in the patcher b&w_pixels subpatch. Other objects exist for making random on/off choices, notably decide and random, but since we intend to display these as pixels in a 4x3 matrix anyway, jit.noise is a reasonable choice of random number generator for this patch. When a jit.noise receives a bang, it produces a matrix filled with random numbers. This object is specified to generate a single plane of char data (numbers 0 to 255) in a 4x3 matrix. This would normally appear as gradations of gray when displayed. The matrix is passed through a jit.< object and the numbers are tested to see if they’re less than 0.5. (Even though we’re dealing with char data, the val attribute should be specified as a float.) This will convert all the values to either 255 (true) or 0 (false). That matrix is then sent out the left outlet to be displayed in the jit.pwindow, and it’s also converted to a list of 12 numbers, which are changed into 0 and 1 values (to be suitable as on/off amplitudes for the oscillators), and sent out, where they’re used to set the amplitudes of the tones produces by ioscbank~.