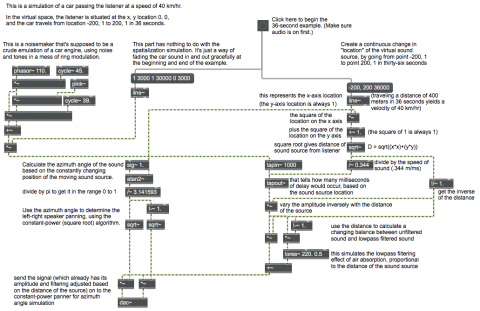 A stereo spatialization effect can be achieved using x,y coordinates to determine intensity and delay for the sound at each speaker at each moment. The hypothetical listener is placed at a point equidistant from the two speakers. The speakers are each assumed to be at some angle from the listener between 0 and pi radians, with 0 radians being straight to the right, pi/2 radians being directly in front of the listener, and pi radians being to the left. (For example, for speakers at the front-left and front-right corners of a square room, and the listener at the center, the angle of the left speaker would be 3pi/4 radians (135 degrees), and the angle of the right speaker would be pi/4 radians (45 degrees). When the angle of the localized sound is greater than or equal to 90 degrees (pi/2 radians) from a speaker, the amplitude at that speaker will be 0.

In this example, we specify starting and ending x and y coordinates for the sound source, and the amount of time needed to get from one point to the other in a straight line. We say that the y coordinate is always 1, the starting x coordinate is -200, and the ending x coordinate is 200; so, the sound will effectively move in a straight line from the extreme left of the listener to the extreme right, passing 1 unit in front of the listener. If we assume those units to be meters, and we take 36 seconds to go from the starting point to the ending point, the sound source will move virtually 400 meters in 36 seconds, which is exactly 40 km/hr, approximately 25 mph. The line~ object provides that continuously changing location information.