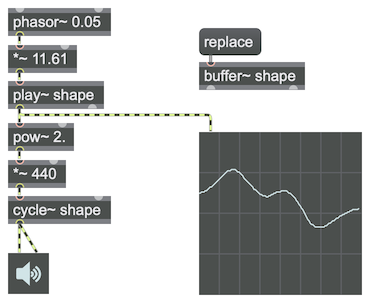 The buffer~ object can hold any audio data—or, for that matter, any collection of floating-point numbers. Most often it's used for audio playback, but it can also store a curve of any desired shape, to be used as a control signal. In this example, it will be used to store a control signal that will influence the pitch of an oscillator. The replace message to buffer~ will load in data from a sound file.

In this patch, some numbers have been provided as typed-in arguments, "hard-coded" constant values that, in a more sophisticated patch, would more likely be made adjustable. An important assumption is that the shape loaded into the buffer~ will be 512 samples long, which, at a sampling rate of 44,100 Hz, has a duration of 11.61 milliseconds. So, the output of the phasor~, going from 0 to 1 with a rate of 0.05 Hz, when multiplied by 11.61, will instruct the play~ object to read through the 512-sample buffer~ once every 20 seconds. The output of play~ will in turn be used as the exponent of the base 2—which, if the exponent ranges from -1 to 1, will cause the pow~ object to output values that range from 0.5 to 2. That value will be multiplied by the base frequency of 440 Hz, causing the pitch of the cycle~ to range from A 220 to A 880.

These numbers were chosen to make shape in the buffer~ have a very specific pitch effect. Making the numbers variable would permit a greater diversity of effects; that would allow for different numbers of samples in the buffer~, a different read-through rate for the phasor~, different sampling rates, and different depths of pitch change. In a slightly different implementation, the wave~ object could be used similarly to the way play~ is used in this example.

A stored shape can be useful as a control signal, lending a certain motivic recognizability to the way sounds are shaped.