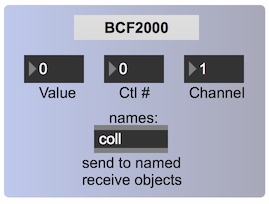 To work properly, this patch requires the abstraction BCF2000.maxpat and the related graphic file "BCF2000.jpg".

Double-click on the "BCF2000" textbutton, which will trigger an open message to a pcontrol object to open the BCF2000 emulator subpatch. Move one of the sliders in the subpatch, and you'll see the MIDI information displayed not only in the subpatch, but also in the main patch. This information is going into the coll object, which uses the controller number to look up the name of a receive object, and then transmits the controller value to any receive objects with that name. Double-click on the coll object to see the names.

If you want to see how this is working, leave Presentation mode to see all the objects in the patch. You could use this scheme to route data from a hardware MIDI controller (or in this case the BCF2000 patch) to named receive objects, or (as is shown if you scoll down in the patch) if you prefer to use patch cords instead of receive objects, you could use swap and pack to combine the controller number and the control value as a two-item list, then use route objects to route the control value to a specific outlet.