Abstraction to trigger a timed series of bangs 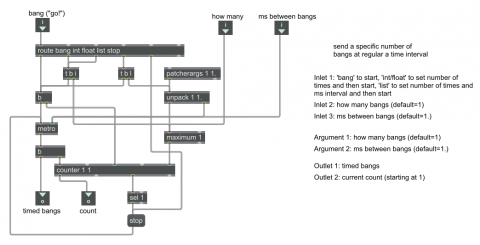 To cause a specific number of events to happen immediately, bangbang (b) and uzi are the best objects to use. To schedule a timed sequence of events at regular intervals of time, the most common method is to combine the metro, counter, and select objects, as demonstrated in the example "Timed counting in Max". This patch provides an efficient single-object method for timed events (and timed counting). By saving this patch with a descriptive name, such as "timedbangs.maxpat" in the Max search path, you can use it as an abstraction (object) in any patch. A demonstration of this patch in use can be found in the example "Try the timedbangs abstraction".

The most important information that such an object needs is "how many events?" and "with what time interval?". In this abstraction, those two items of information can be provided as typed-in arguments, or via the second and third inlets, or as a list in the left inlet. When a bang or an int or a float message is received in the left inlet, the specified number of bangs (and the count of those events) will be sent out with the specified timing.

Let's look at how the patch works. It requires an object to take care of the timing/scheduling, namely the metro object, and an object to keep track of how many bangs have been sent out, namely counter. When a bang is received in the left inlet, it first resets the counter to its minimum (1) then starts the metro, which will have whatever millisecond time interval has been specified for it. When the counter reaches its specified maximum (the "how many" number), the number 1 is sent out of counter's third outlet, and is detected by the sel 1 object, which triggers a stop message to the metro to stop it from sending any more bangs.

This patch foresees a couple of other messages the user might want to use. One is that an int or float message in the left inlet will set the "how many" number and will also do the same thing as a bang would. A list of "how many" and "how often" numbers in the left inlet will also set those values and act as the starting bang. And, because all programs should have a way to turn them off, this patch recognizes a stop message, which stops the metro immediately.