Zoom a video in or out 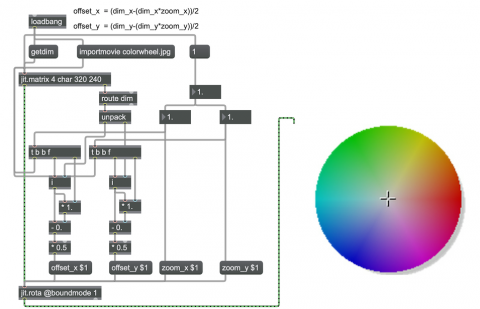 The patch shows a way to zoom in on a video while keeping it centered in a fixed-size window. When the patch is opened, the importmovie message is used to load a still image into a jit.matrix object. (The still image allows you to see the zooming clearly, but you could easily replace the still image with a video in a jit.movie object.) As soon as the image or video is loaded, you can use a dim message to obtain its dimensions.

The zoom_x and zoom_y messages to jit.rota specify a zoom factor along the two axes of the 2D matrix. However, once the zoom of the image has been changed, it will no longer be centered in the outgoing matrix. So, to keep it centered, you need to offset the matrix by the appropriate amount. The number of pixels for the offset_x and offset_y messages to jit.rota are calculated by dividing the x and y dimensions of the matrix by the zoom factors of each dimension, then offsetting by half that number to keep the image centered.