Using the metro object controlled by the transport 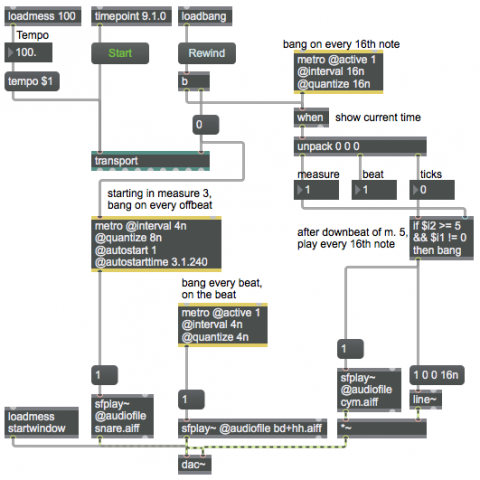 Whenever the time interval of a metro object is specified using tempo-relative time units such as note values, the operation of that metro will be governed by the transport. The metro will only operate when the transport is turned on.

There are several ways to control the behavior of the metro via its attributes when it’s governed by the transport. Read in the manual about the @interval, @quantize, @active, @autostart, and @autostarttime attributes of metro. The when object reports the current time of the transport. The timepoint object automatically reports (sends out a bang) when a specific moment in time has been reached.

This patch shows a few ways you might use some of the features of transport-synched metro objects.

At the top of the patch are two textbutton objects, showing the words Start and Rewind. The one on the left is in Toggle mode, so it will send out a 1 or a 0 when clicked or triggered, and will toggle its text between Start and Stop. The one on the right is in Button mode, so it will just send out a bang. When the patch is loaded, a loadbang object sets the transport to time 0 and reports the current time with the when object. At the bottom of the patch are three sfplay~ objects, loaded with three short percussive sounds that come with the Max application: snare drum, bass drum plus hi-hat, and cymbal.

When you click the Start button, it turns on the transport, which enables the three metro objects. Notice that two of the three metro objects have their active attribute turned on, which means they are running whenever Max's transport is running. The other metro is not active at first, but has its autostarttime attribute set to start on the second half of (i.e. 240 ticks after) the first beat of the third measure. So, immediately the metro that is quantized to send out a bang every quarter note will trigger the kick drum sound every beat, and the metro that is quantized to send out a bang every sixteenth note will cause the when object to report the current time. In measure 3, the other metro will begin triggering the snare drum sound. Note that it is set to trigger at the time interval of a quarter note, but is quantized to the nearest eighth note and starts on the offbeat, so it will play every offbeat.

Then, in measure 5, the conditions of the if object will be satisfied. The arguments of the if object specify, "If the measure number is at least 5, and the ticks number is not 0, send out a bang." Thus, the cymbal sound will be triggered on every offbeat sixteenth note, but not right on the beat (when the ticks will be 0). Note also that, in order to keep the cymbal sound short, we use a line~ object and a *~ object to fade the sound out quickly each time it's played. The message to line~ says, "Go to 1 (full amplitude) in 0 ms, then go to 0 (silence) in the time of a 16th note."

Finally, on the downbeat of measure 9 (i.e., after having played for 8 measures), the timepoint object sends out a bang to toggle the textbutton to Stop and stop the transport.