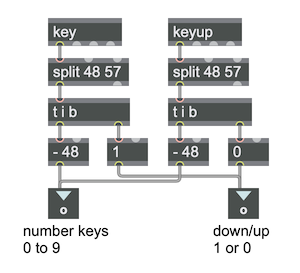 Using both the key and keyup objects, you can tell when a key was pressed and when it was released. The split object allows you to isolate a range of numbers; it passes only the specified range of numbers out its left outlet, and passes all other numbers out its right outlet. The numbered keys 0 to 9 correspond to ASCII codes 48 to 57, so it's easy to isolate those keys, and subtracting 48 brings those numbers down into the range 0 to 9. In this example, we trigger a 1 when the key is pressed and a 0 when it is released—in the manner of a MIDI key producing nonzero and zero velocities—and then pass on the 0-to-9 number. This seems like a potentially useful function for using the number keys as button presses (momentary toggles) to control your Max program. The outlet objects make this program useful as an object in some other patch. When used as an object in a parent patch, this program will first send the down/up status of the key out the right outlet, and it will then send the key number (0 to 9) out the left outlet.