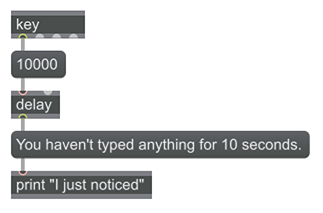 What's the best way to detect lack of activity?

Let's say you want to Max to notify you if it has received no input for ten seconds. You could use a metro or a clocker to monitor activity constantly, and use a >= object to check when a time period 10,000 ms has been reached. However, by doing that, you're going to do lots of tests, only the last of which will give the looked-for result. There's an easier way.

The delay object schedules a single bang for some time in the future. When delay receives an int in its left inlet, it uses that number as the delay time in milliseconds, and schedules a bang to be sent out in that amount of time. If another int or bang comes in its left inlet before that first bang is sent out, delay will cancel the first scheduled bang and schedule a new one. Thus, if you use each incoming event to schedule a bang in delay, the bang will never get sent out as long as there is activity before the scheduled time. If, however, there is no activity for that given amount of time, the bang will get sent out of delay, and can be used as a report of inactivity.