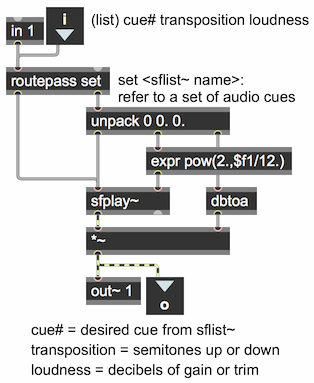 This is a subpatch that can be used for playing sound cues from an sflist~ object. It has one inlet and one outlet, and—serving the same purpose—it also has an in object and an out~ object; thus, it can be used either as a normal subpatch or as the content of a poly~ object. It's monophonic, but one could easily adapt it to make a stereo version.

The object that plays the sound cue is sfplay~. Rather than sending 'open' or 'preload' messages to that object, this subpatch assumes that there is an sflist~ object somewhere else that contains the necessary sound cues. So you just refer this sfplay~ object to that sflist~ by sending in the message 'set' followed by the name of the sflist~.

For playing a sound cue, this subpatch expects to get three pieces of information in a single list: the cue number (referring to the sflist~), a number of semitones you'd like to transpose the sample by means of speed change (the transposition can be a fractional number), and the number of decibels of gain or trim you'd like to use to alter the amplitude of the sound. To provide all that information, you send in a three-item list. If you send in a two-item list, the amplitude will stay the same as previously designated (unity gain initially). If you send in just a single number (the cue number), the previous transposition and amplitude will be used.

When multiple copies of this subpatch are used (as in a poly~, for example), each voice of the poly~ could refer to a different sflist~ if so desired, or they could all refer to the same sflist~. This is quite a simple yet versatile patch, because you have easy control of the choice of sample, its transposition, and its amplitude. To stop a sound cue, of course, you just need to send in 0.