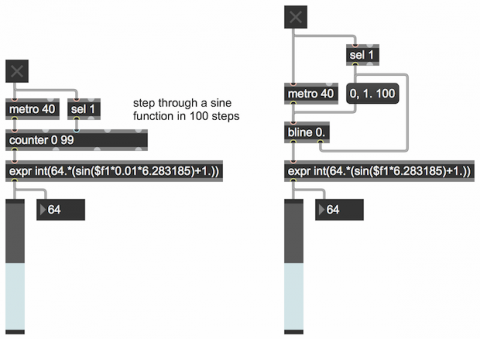 To generate a series of numbers in Max that outline a sinusoidal shape, you can use the sin() function in the expr object. As the argument in the sin() function goes from 0 to 2π (6.283185), the output will be the sine of that value, going from 0 up to 1, down to -1, and back up to 0. So, by feeding a series of numbers into expr, you can generate numbers that follow that sinusoidal pattern.

The right part of the patch does something very similar, using the bline object instead of a counter. The message box tells bline "Set yourself to 0, and get ready to go to 1 over the course of the next 100 bangs you receive." Because the numbers from bline will already go in increments of 0.01 (one hundred steps from 0 to 1), there's no need for the 0.01 multiplication we used in the left part of the patch. When bline reaches its destination on the 100th bang, a bang comes out its right outlet, which we use to retrigger the message box in order to set up bline for the next bang it receives.

In both these cases, since the metro is sending a bang every 40 milliseconds, be expect it to produce 25 bangs per second, so it will produce 100 events in 4 seconds. So, you can think of the frequency of the sinusoidal motion to be 0.25 cycles per second, and the sampling rate is 25 samples per second.