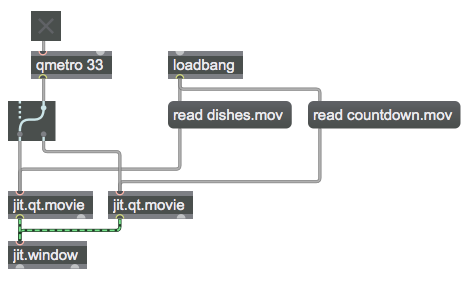 This is the simplest possible way to switch between two videos. When the patch is opened we read in a couple of example video clips (which reside with the Max application folder, so they should normally be in the file search path). Because the default state of the 'autostart' attribute in jit.qt.movie is 1, the movies start playing immediately. Because the default state of the 'loop' attribute in jit.qt.movie is 1, the movies will loop continually. Click on the toggle to start the qmetro; the bangs from the qmetro will go out one outlet of the ggate (the outlet being pointed to by the graphic), and will thus go to one of the two jit.qt.movie objects and display that movie. Click on the ggate to toggle its output to the other outlet; now the bangs from the qmetro are routed to the other jit.qt.movie object, so we see that movie instead. (Note: You can also send a bang in the left inet of ggate to toggle it back and forth, or you can send it the messages 0 and 1 to specify left or right outlet.)

If you don't know the difference between a metro object and a qmetro object, you can read about it in this page on "Event Priority in Max (Scheduler vs. Queue)". In short, qmetro is exactly like metro except that it runs at a lower level of priority in Max's scheduler; when Max's "Overdrive" option is checked, Max will prioritize timing events triggered by metro over those triggered by qmetro. Since the precise timing of a video frame's appearance is less crucial than the precise timing of an audio or musical event (we don't notice usually when a frame of video appears a fraction of a second late or even occasionally is missing altogether, but we do notice when audio drops out or when a musical event is late), it makes sense to trigger video display with the low-priority scheduler most of the time.