Set the state of different sets of toggles 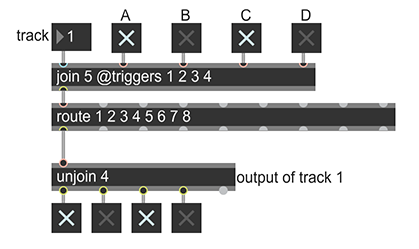 This patch shows how you might use one set of four toggle objects to control the states of four on/off switches in each of eight different "tracks" or "banks" of four. There are four toggles to control the states in each track. The toggle states will be routed only to the selected track number. If you wanted to recall the state of each track's four states each time you select a track, you'd need to store the states of each track's settings somewhere and get them each time a new track number is selected.

The route object compares the first item of an incoming message to each of its arguments, and sends the rest of the incoming message out the corresponding outlet. So, in this case, the track number will be used to choose which outlet of route will send out the rest of the list (the 1 or 0 or each of the four toggle objects). The join object concatenates all its input messages (separated by spaces) into a single output message. It can be set to have multiple triggering outlets, by means of the triggers attibute. The inlets of join are numbered starting from 0, so this join object is set to be triggered by input to inlets 1, 2, 3, and 4, but not by inlet 0.