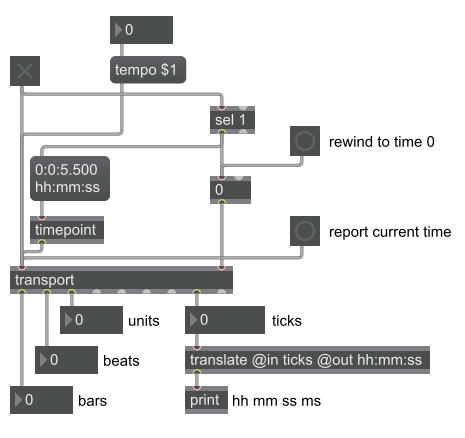 To schedule timepoints in straight clock time, it’s easy enough to do, and if I want transport to report the current time to me in straight clock time, that’s easy enough to do, too. In the following example, when you start the transport with the toggle, it rewinds to time 0 and schedules a timepoint to occur at time 5.5 seconds. By default the transport’s tempo is 120 bpm, so we would expect that timepoint to happen 11 beats later, i.e., after 5280 ticks, i.e. on beat 4 of bar 3 (in the default timesig of 4/4). Now try changing the tempo and restart the transport. The timepoint object will do whatever it needs to do to translate the 5.5 second request into the correct number of ticks based on the new tempo, and it will still trigger at the correct time. Of course, transport will report different tempo-relative times for that instant, but the translate object will reliably translate the ticks back into clock time for printing.