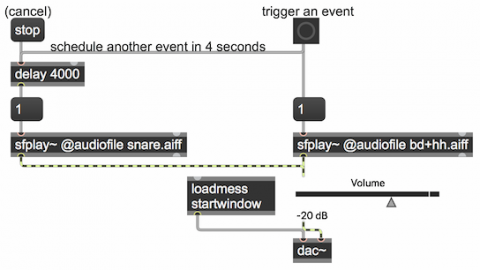 Timing is very important in music. The fundamental way to ensure precise timing of events is to use a scheduler. A schedule is a list of time-tagged events to be executed at specific times in the future. That schedule must be consulted constantly at regular intervals (as often as possible, e.g., every millisecond) to see if any item on the list has a time tag that is less than or equal to the current time; if so, that event should be enacted.

Max has a master scheduler constantly running behind the scenes, and has various objects that allow you to post events on the schedule. The simplest of all of those is the delay object. When delay receives a bang in its left inlet, it schedules that bang to be sent out its outlet after a delay of a certain number of milliseconds, which has been specified in its right inlet. (Alternatively, if delay receives an int or a float in its left inlet, it uses that number to set its delay time, overwriting whatever number was previously set as the delay time, and schedules a bang to be sent out after that number of milliseconds has elapsed.)

In this example, we use a bass drum sound and a snare drum sound as two stand-ins for the idea of "an event", but in fact an event can be any Max message, or combination of messages, even turning on or off other entire processes. The delay time might be only a few milliseconds, to make two things happen in rapid precisely-timed succession, or it could be a much longer time (though still expressed in terms of milliseconds) such as several seconds, minutes, or even hours.

Although it's not demonstrated in this example, it's also possible to specify the delay time in tempo-relative time units, such as 4n for a quarter note, based on the current tempo of the Max transport, but in that case delay will only work when the transport is on.