Sample playback driven by a signal 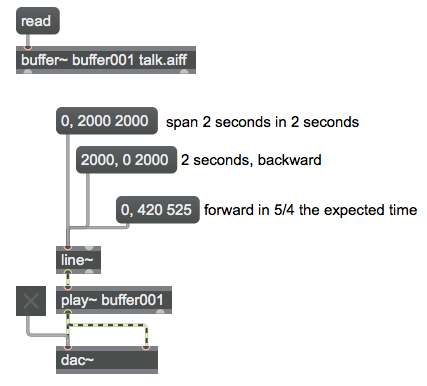 The play~ object can be controlled by any MSP signal in its inlet. The value of the signal controls the location in the buffer~, in milliseconds. Normal playback can be achieved in this way by using a linear signal, such as from a line~ object, that traverses a given time span in the expected amount of time. By making a signal that goes linearly from a ‘starttime’ to a ‘stoptime’ in a certain amount of time, line~ can be used to get the same sorts of playback as with the start message with three arguments demonstrated in the previous example.

In this patch you can see how the line~ object is commanded to leap to a particular value, then proceed to a new value linearly in a certain amount of time. The existence of a comma in a message box divides the message into two separate messages, sent out in succession as quickly as possible. So a message such as 0, 2000 2000 sends out the int message 0 followed immediately by the list message 2000 2000. The int causes line~ to go to the value immediately, and the list causes line~ to use the number pair(s) as destination and ramptime. So the first message says, "Go to 0 immediately, then proceed toward 2000 in 2000 milliseconds." This will result in normal forward playback. Going from 2000 to 0 in 2000 milliseconds causes backward playback at normal speed. Going from 0 to 420 in 525 milliseconds causes the playback to be at 4/5 normal speed, which also causes downward transposition by a major third.