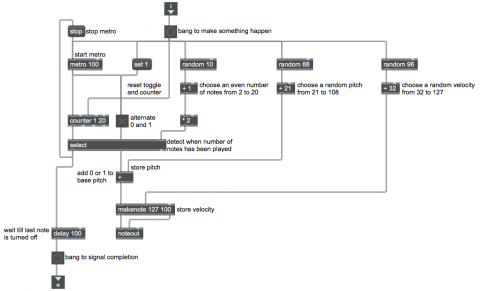 If you add 0 or 1 alternately to a pitch, you get a semitone trill. That's what this patch does. When the patch receives a message in its inlet, it chooses a MIDI pitch and velocity at random, chooses an even number of notes to play from 2 to 20, then turns on a fast metro to trigger a toggle to generate the trill on the chosen pitch. When it has played that number of notes, it stops the metro and—after waiting for the last note to finish, with the delay 100 object—sends a bang out its outlet to notify the parent patch that it's done playing the trill.

This is not a terribly exciting musical result in its own right, but it does show how you can generate a musical behavior algorithmically by thinking abstractly about how it's achieved. This particular abstraction, a patch meant to be used inside another patch, has a straightforward communication protocol: any message in its inlet gets converted to bang and starts the process, and when the process is done, it sends a bang out its outlet to indicate completion. This abstraction is used inside another example, titled "Choose from among multiple processes".