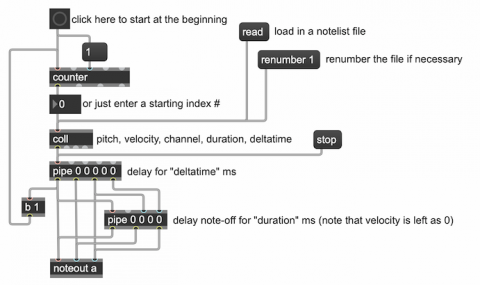 The coll object stores an indexed collection of messages. You can trigger those messages to be sent out, just by sending coll the index of the desired message. One way that this can be useful is that you can make an entire musical score in the format of a collection of note messages, each of which contains whatever information you consider vital for describing a note. That’s similar to the way that languages like csound and cmusic read a score file to play notes.

This patch demonstrates that idea. The format for describing a MIDI note in this patch is: pitch velocity channel duration delaytime (time to wait before playing). You compose a collection of such note messages (either by hand or algorithmically), and then you simply read through the collection, using each note message to trigger the subsequent message (which gets delayed the specified amount of time before it’s played, and before it triggers the next note).

When you click on the button, the counter is set to start at 1 and the first number is sent to coll. The coll receives that number and sends out the note message associated with the number 1. The pipe object delays the first four numbers in the message by the amount of time specified in the fifth number (which, in this case, is 0 milliseconds). When that time has elapsed, it does three things. 1) It sends the pitch and the channel number, along with the duration information, to another pipe object which delays pitch and channel (and a note-off velocity of 0) by the duration of the note. In effect, this schedules the MIDI note-off message to be sent out a certain amount of time in the future. (Note that the second inlet of that pipe never receives anything, so the velocity value of that pipe will always be 0, for note-off.) 2) It sends pitch velocity and channel to a noteout object to start the note (which will get turned off later by the note-off that was scheduled in step 1). 3) It sends a bang to the counter to trigger the next note message from the coll. When the coll runs out of notes to play, it won’t send anything, and the process will stop.