Other basic functionality of the transport object 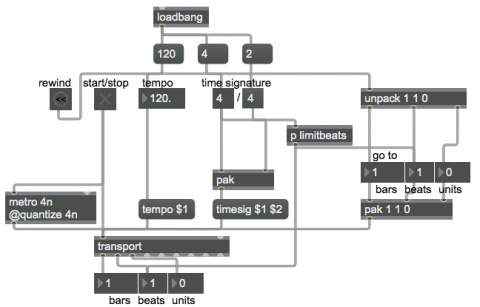 This patch does some of the same things as the "GlobalTransport" patch in the Extras menu, and shows what is likely going on behind the scenes in that patch. The toggle labeled "Start/Stop" starts the transport and immediately turns on the metro to begin triggering time reports. The button labeled "Rewind" sends a time position of bar 1, beat 1, 0 ticks to the transport to reset its time. You can enter any time you want in the number boxes labeled "Bars", "Beats", and "Units". The tempo <bpm> message sets the transport's tempo attribute. The timesig <numerator> <denominator> message sets the time signature. Although it's not visually obvious, the denominator is actually specified in this patch with a umenu (in Scrolling mode so that it responds to dragging with the mouse) that contains only numbers that are powers of 2. The numerator and denominator both go to a pak object, and then become part of a timesig message. (pak differs frompack in that it sends its output whenever it receives input in any inlet, whereas pack sends its output only when it receives input in its left inlet.) When a numerator is specified, it also is used to set the maximum of the "Beats" number box. (Double-click on the p limitbeats object if you want to see how that's being done.)