Notify when a certain time has elapsed 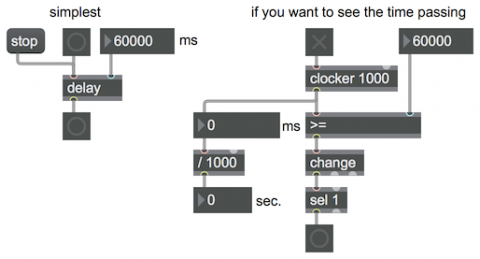 Notify when a certain time has elapsed

In Max, there is no built-in object called “stopwatch”. The object that performs the stopwatch function described above is called timer. If you want an object with the timer functionality described above, use the delay object, as shown in this example. You might think you should start a clock object such as clocker 1000 (or metro 1000 banging a counter) and detect when it has reached a certain number, but that’s really what the internal Max scheduler does, so if all you care about is receiving the notification at the right time, delay is perfect. If you want to get intermediate notifications of how much time has elapsed (or a countdown of how much time remains), then indeed clocker (or metro with counter) is a good choice.