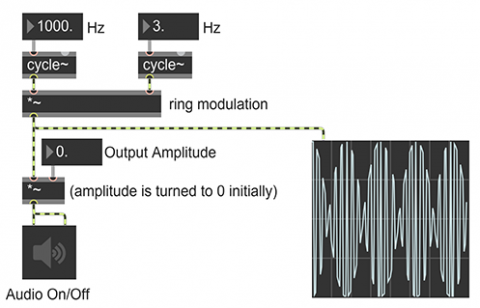 Multiplying one tone by another, in effect, imposes the contour of one waveform on that of the other waveform. For example, mutiplying a 1000 Hz sinusoidal tone by a 3 Hz sinusoidal tone yields something very much like a 1000 Hz sine tone, but with its amplitude continually shaped by the low-frequency oscillator (LFO). Because the LFO goes from 0 to 1 to 0 to -1 to 0 each cycle, the amplitude of the 1000 Hz tone goes from 0 up to 1 and back down to 0, then to -1 and back to 0 for each cycle of the LFO. We don't distinguish auditorily between negative and positive amplitudes, so to us it sounds like the sound is pulsating twice per cycle of the LFO, which, with a 3 Hz LFO, is 6 times per second.

Ring modulation is a particularly useful effect when one of the two tones is a complex tone containing many frequencies; the modulation creates a sum and difference frequency for each of the component frequencies, radically changing the harmonic content of the tone.