Look up chords in an array 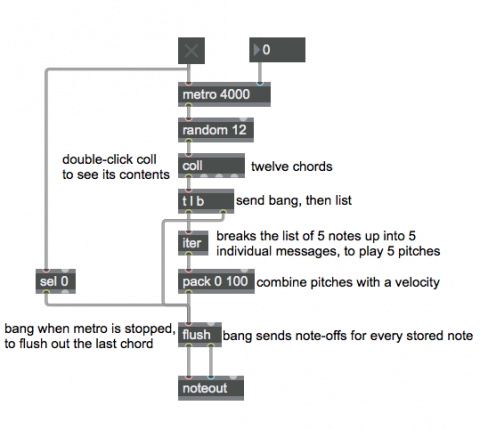 The coll object allows one to store an indexed collection of messages of any type. In this example, each stored message is a list of five numbers that will be used as pitches of a chord. (Double-click on the coll to view its contents.) The chords are chosen at random, but they have been composed such that they all have a valid function in C minor, and because they are all five-note jazz chords voiced in a similar manner and range, stylistically any one of the twelve chords sounds reasonable following any other.

The iter object breaks up each list into five separate int messages, each of which is packed together with the number 100 as a two-item list, and that list is passed to noteout as pitch and velocity information.

This patch demonstrates an effective way to provide note-off messages for MIDI notes. Pitch and velocity pairs can be passed through the flush object, and flush will memorize all pairs that are note-ons––that is, pairs in which the velocity is nonzero; then, when flush receives a bang, it outputs note-offs for each note-on that it has in memory that has not yet been followed by a note-off. In this patch, each time a list comes out of the coll, it triggers a bang to turn off the held notes of the previous chord before playing the next chord.