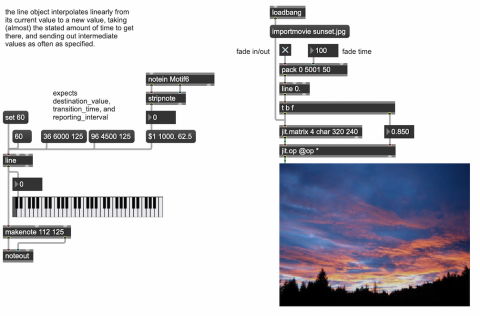 The line object sends out a periodic series of numbers that progress to some new value over a certain amount of time. The input to line is a destination value (where it should eventually arrive), a transition time (how long it should take to get there), and a time interval between outputs (how often it should send out intermediate values along the way). The left part of this patch shows the use of line to generate integers that are used as pitches. (The integers could just as well be used as indices in a table to look up a non-linear series of numbers.) The right part of the patch uses line to generate floats from 0 to 1 that are uses as a multiplier to control the brightness of an image in a Jitter matrix. The pack object takes in several numbers (three in this case) and sends them out together as a single list, which line interprets as ‘destination value,’ ‘transition time,’ and ‘output interval.’ Each output of line first goes to the right inlet of the jit.op object (to be used as the multiplier) and then sends a bang to the jit.matrix object to send out its jit_matrix.